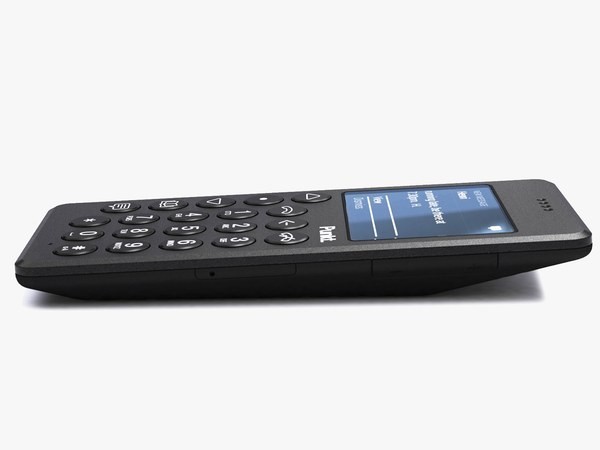 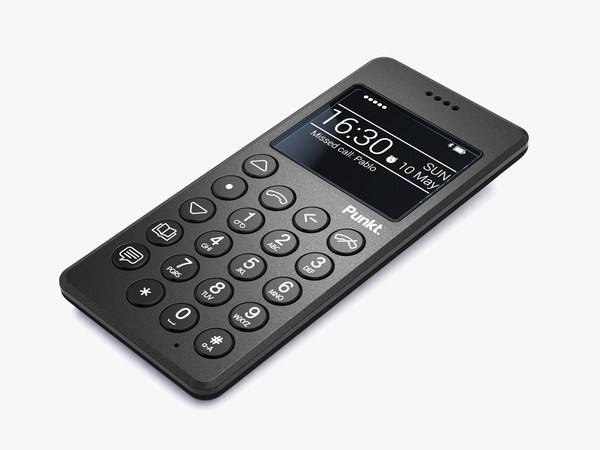 If you need a digital detox, you'll love this smart dumbphone

TO CASH IN on the growing anxiety that we are fast becoming a bunch of Wi-Fi-enabled cyborgs, the marketplace has spawned a new consumer category: products to free you from the crushing grip of always-on digital ubiquity.

There are digital detox retreats: off-grid playgrounds where the habitually frazzled do downward dog in grassy fields and type letters on manual typewriters. There are  bath salts, too—minerals specially formulated to cleanse the bodies and minds of digital natives. For those oblivious to irony, there are even digital detox apps like ShuttApp and AppDetox. But of all these antidotes to dystopia, the most intriguing is the Punkt MP01, a handset that only offers calling and texting. No apps, no camera, no nothing. The Swiss tech company behind this stylish but low-tech phone trumpets a sales pitch that conjures the aspirational vanity lurking in us all: Offline is the new luxury.

I wanted that luxury. Especially after digging up this chilling statistic: The average person will spend 3.9 years of their life staring at a smartphone screen. The fact that I had Googled this on my iPhone while waiting in line at the Genius Bar made the experience all the more horrific. I briefly fantasized about throwing my iPhone down in anger, shattering the Gorilla Glass on the Florentine stone floor and wailing, "I am not a cyborg! I am a human being," as I was strong-armed by security.

Instead, I went home, contacted Punkt, and requested an MP01 review unit. Would this 5 "dumbphone" provide the digital detox salvation that I craved? For the sake of the human race, I'll give it a shot.

It's a good thing for the human race I'm a T-Mobile customer. Because that's the last national carrier that still supports 2G, the aging, low-bandwidth network that the MP01 operates on. Verizon and AT&T subscribers, this handset won't work on your 3G network. Same with 4G: no dice. Running a new phone on an old mobile radio frequency makes it useless in some parts of the world: Japan, South Korea, Singapore, and Australia (effective September, 2017) for starters. There's still a 2G carrier in Canada, but it's shutting down service next year. And T-Mobile is committed to 2G only until 2020. This doesn't stamp an expiration date on me and my fellow cyberpunks, though. The home office in Bern, Switzerland assures me that a next-gen Punkt phone will be released before 2G goes extinct.

I time the Punkt delivery perfectly thanks to the FedEx app on my iPhone. I steel myself for the dark days to come. As I cut through the packing tape, I'm interrupted by an iPhone notification. Yes! A reprieve: my favorite food truck is in the neighborhood. Day one of my seven day digital detox is supposed to start today, but that will have to wait—the grub truck beckons. I rush out of the house with my iPhone, leaving the MP01 behind like an orphaned child. My excuse: No cash in the house, and my iPhone has Apple Pay. I never do finish the unboxing. I feel pathetic.

My fingers tremble as I remove the SIM card from my iPhone and insert it into the MP01. I power up, and the phone comes to life. No need to crack the manual. If you can play Pong, setup doesn't take more than a minute. I punch in the time and date, then select a "bespoke ringtone": Morgenfugl ("morning lark" in Norwegian), an eerily realistic bird chirp. That's one reason why this bare-bones phone is so expensive—the details. When British designer Jasper Morrison insisted on a luxe and cost-ineffective "high specification camera paint" finish, the budget rose accordingly; and, when the Norwegian "sound artist" Kjetil Rost Nilsen was inspired to design ringtones that could pass for bird calls, the budget took another big hit. Digital detox for fancy people costs a bundle. I plug the MP01 into a power strip. A full charge will give me 290 minutes of talk time and three weeks of standby. Goodbye low battery anxiety, hello nomophobia. I scroll through the Punkt. menu: alarm, calendar, reminders, saving contacts. So much for features. This is basically a Nokia 6210 for minimalists.

I wake up to the muffled sound of bird song. Squinting through crusty eyes, I retrieve the MP01 from beneath the pillow and tap the screen. Damn you, muscle memory. Being a dumbphone lab rat will require me to scale a steep unlearning curve. While studying the elegant Roboto typeface the sober implications of this experiment suddenly sink in: For the next week there will be no more Spotify playlists or NBA Live. No Radiolab podcasts or NYTimes alerts either. I will be disconnected but contactable, meaning that my mobile communication will be defined by the Punkt's puny capabilities: phone calls and texts—that's it. The detox hasn't started in earnest and already I'm experiencing mild withdrawal. Seeking solace and reassurance, I phone my wife. "Why are you calling me?" she asks, clearly irritated that my 2G signal has pierced her digital cocoon. "What's wrong?" I have no answer. Something is definitely wrong, but what? Perhaps the symbiosis of man and machine truly is my destiny. I ponder this existential plight. The dead air makes my wife uncomfortable. She has to go. It occurs to me that we don't talk enough. Not just the two of us, but everyone.

This matte black toy cradled in my palm feels more like a riverbed rock than a piece of hardware. Cosmetically, this is Dieter Rams all over: the front looks like a '90s Braun calculator, while the dimpled shell in back is a riff on '80s Braun electric shavers and a sly nod to the word "Punkt" ("period" in Norwegian). In lieu of colorful app icons on a touchscreen, detoxers get a simple monochromatic display and backlit buttons. Like a kid in an elevator, I push all these buttons. The haptic feedback is satisfying. So is hearing the crisp "click" of each digit input—more tasty sound effects by Mr. Nilsen. The detox spell of the MP01 is working. I place another call, this time to my son. To my surprise, he answers. Even more surprising is the clarity of his voice after I engage the speakerphone function. That's because, unlike most smartphones, the back of the MP01 isn't flat. The eight-degree angle built into the case elevates the speaker slightly. This subtle wedge, which creates just enough space to bounce sound waves instead of drilling them into a table, is the kind of thing you get when you hire a world-class industrial designer. "Hi my boy. Just wanted to say hello." There is distrust in his tone, as if he suspects this is a mimic algorithm and not his real father. "Why didn't you just text me?" This will become a recurring theme.

I've only responded to a handful of texts on the MP01 so far. That's what happens when the SMS interface is the predictive-text algorithm, better known in geekspeak as "T9" (text on 9 keys). Reduced to hunting-and-pecking on Jasper Morrison's gorgeous but archaic 3x4 keypad, I realize texting is part of the problem with our digitized society. The activity reinforces the neuroplasticity that transports us that much closer to cyborgdom. Stunned by this revelation, I seek refuge in a neighborhood diner. I need to be around people, not technology. When the waiter drops the check, he notices the MP01. Everyone does, actually. How could you not? "Nice calculator," he says. When I tell him it's a "digital detox phone," the Punkt immediately assumes a mystical aura. Sensing he wants to touch it, I hand it over. He presses a button, which illuminates the screen. "Awesome!" he exclaims, marveling at the fashionable vintage vibe. I give him the entire spiel, from the quirky Audubon ringtones to the battery that keeps its charge for weeks. He laps it up. When I tell him it costs 300 bucks, he doesn't flinch. Maybe we aren't doomed after all.

There is a Punkt cult. And it's not just the usual assortment of Luddites, spiritualists, and Dwell subscribers. Czech model Eva Herzigova and American actor Billy Zane use the MP01. It's a thing in the music industry, too. English rapper Professor Green, American beatboxer Reggie Watts, and concert pianist James Rhodes are fans. Adam Alter, an NYU psychology professor and author of Drunk Tank Pink: And Other Unexpected Forces That Shape How We Think, Feel and Behave, concurs: "It's a fashion statement more than a piece of tech, and, like traditional cellphones before the smartphone era, it's unlikely to come between you and the real world." My editor is unmoved by such scholarly analysis. He dismissed the Punkt as a "handheld smugness device." Everything is a joke with this guy. When I pitched this story, he called it a "novel idea" and "stunty." It always comes down to eyeballs and clicks with him, nothing more. We'll see who's laughing when I'm writing haiku on a beach and he's reduced to editing Watson's AP copy with the RedPencil app.

By the end of the detox, I am transformed. Sort of. I'm not Henry David Thoreau, but I'm not Inspector Gadget either. My wife says my posture has improved and I'm more "engaged" during dinner conversations. My quality of sleep has also benefited. That may have to do with reading hard copy at night rather than immersing myself in the latest iOS-delivered Beltway scoops. I'm also noticing things around me that I've slowly become accustomed to not noticing, like the the sound of children's laughter when I pass a playground and the way buildings look when they're bathed in soft light at dusk.

Would I swap my iPhone for the Punkt? Hell no. Steve Jobs nailed it: smartphones are still the ultimate digital devices. The superpowers they bestow, like finding the shortest route during a commute or being able to teleconference with somebody in Mumbai is, as Jobs would say, insanely great. But the MP01 is no startup gimmick. This is one smart dumbphone. The underlying premise is actually true: it eliminates distractions and increases focus. More importantly, though, this machine promotes human interaction. Not just telephone conversations, but real human-to-human contact. With no access to GPS, halfway into the detox, I found myself lost in an unfamiliar neighborhood. To get my bearings, I approached a traffic cop who gave me directions and also engaged me in a conversation about police dogs (I was looking for a pet store). The Punkt also reveals hidden secrets. Who knew, for instance, that an Uber driver can be summoned without the Uber app? It turns out there's an Uber website (m.uber.com) the anti-smartphone crowd can browse on a laptop.

Skeptics and cynics should take Punkt up on its 30-day return policy. No need to get carried away. Start slowly. Use the MP01 on a lazy weekend just to gauge addiction. If you don't get the DTs (digital tremens) consider using it during a longer family holiday. You might be surprised. It won't change your life, but it may make you more human.

Back to the Challenge