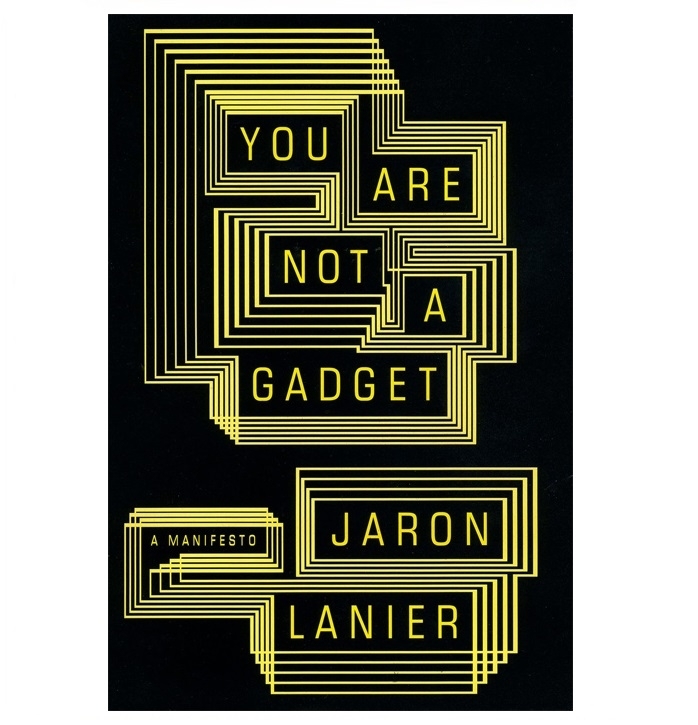 You are Not a Gadget

Particularly suitable for the technically-minded.

Information from the publisher
A NATIONAL BESTSELLER

A programmer, musician, and father of virtual reality technology, Jaron Lanier was a pioneer in digital media, and among the first to predict the revolutionary changes it would bring to our commerce and culture. Now, with the Web influencing virtually every aspect of our lives, he offers this provocative critique of how digital design is shaping society, for better and for worse.

Informed by Lanier’s experience and expertise as a computer scientist, You Are Not a Gadget discusses the technical and cultural problems that have unwittingly risen from programming choices – such as the nature of user identity – that were “locked-in” at the birth of digital media and considers what a future based on current design philosophies will bring. With the proliferation of social networks, cloud-based data storage systems, and Web 2.0 designs that elevate the “wisdom” of mobs and computer algorithms over the intelligence and wisdom of individuals, his message has never been more urgent.

“Lucid, powerful and persuasive. . . . Necessary reading for anyone interested in how the Web and the software we use every day are reshaping culture and the marketplace.” — Michiko Kakutani, The New York Times

“Persuasive. . . . Lanier is the first great apostate of the Internet era.” — Newsweek

“Thrilling and thought-provoking. . . . A necessary corrective in the echo chamber of technology debates.” — San Francisco Chronicle

“With an expertise earned through decades of work in the field, Lanier challenges us to express our essential humanity via 21st century technology instead of disappearing in it. . . . [You Are Not a Gadget] compels readers to take a fresh look at the power—and limitations—of human interaction in a socially networked world.” — Time (“The 2010 Time 100”)

“Lanier is not of my generation, but he knows and understands us well, and has written a short and frightening book, You Are Not a Gadget, which chimes with my own discomfort, while coming from a position of real knowledge and insight, both practical and philosophical.” — Zadie Smith, The New York Review of Books

“Important. . . . At the bottom of Lanier’s cyber-tinkering is a fundamentally humanist faith in technology. . . . His mind is a fascinating place to hang out.” — Los Angeles Times

“A call for a more humanistic—to say nothing of humane—alternative future in which the individual is celebrated more than the crowd and the unique more than the homogenized. . . . You Are Not a Gadget may be its own best argument for exalting the creativity of the individual over the collective efforts of the ‘hive mind.’ It’s the work of a singular visionary.” — Bloomberg News

“A bracing dose of economic realism and Randian philosophy for all those techno utopianists with their heads in the cloud. . . . [Lanier is] a true iconoclast. . . . He offers the sort of originality of thought he finds missing on the Web.” — The Miami Herald

“For those who wish to read to think, and read to transform, You Are Not a Gadget is a book to begin the 2010s. . . . It is raw, raucous and unexpected. It is also a hell of a lot of fun.” — Times Higher Education

“[Lanier] confronts the big issues with bracing directness. . . . The reader sits up. One of the insider’s insiders of the computing world seems to have gone rogue.” — The Boston Globe

“Gadget is an essential first step at harnessing a post-Google world.” — The Stranger (Seattle)

“Lanier turns a philosopher’s eye to our everyday online tools. . . . The reader is compelled to engage with his work, to assent, contradict, and contemplate. . . . Lovers of the Internet and all its possibilities owe it to themselves to plunge into Lanier’s manifesto and look hard in the mirror. He’s not telling us what to think; he’s challenging us to take a hard look at our cyberculture, and emerge with new creative inspiration.” — Flavorwire

“Poetic and prophetic, this could be the most important book of the year. . . . Read this book and rise up against net regimentation!” — The Times (London)

“[Lanier’s] argument will make intuitive sense to anyone concerned with questions of propriety, responsibility, and authenticity.” — The New Yorker

“Inspired, infuriating and utterly necessary. . . . Lanier tells of the loss of a hi-tech Eden, of the fall from play into labour, obedience and faith. Welcome to the century’s first great plea for a ‘new digital humanism’ against the networked conformity of cyber-space. This eloquent, eccentric riposte comes from a sage of the virtual world who assures us that, in spite of its crimes and follies, ‘I love the internet.’ That provenance will only deepen its impact, and broaden its appeal.” — The Independent (London)

“Fascinating and provocative. . . . Destined to become a must-read for both critics and advocates of online-based technology and culture.” — Publishers Weekly
Publisher’s website