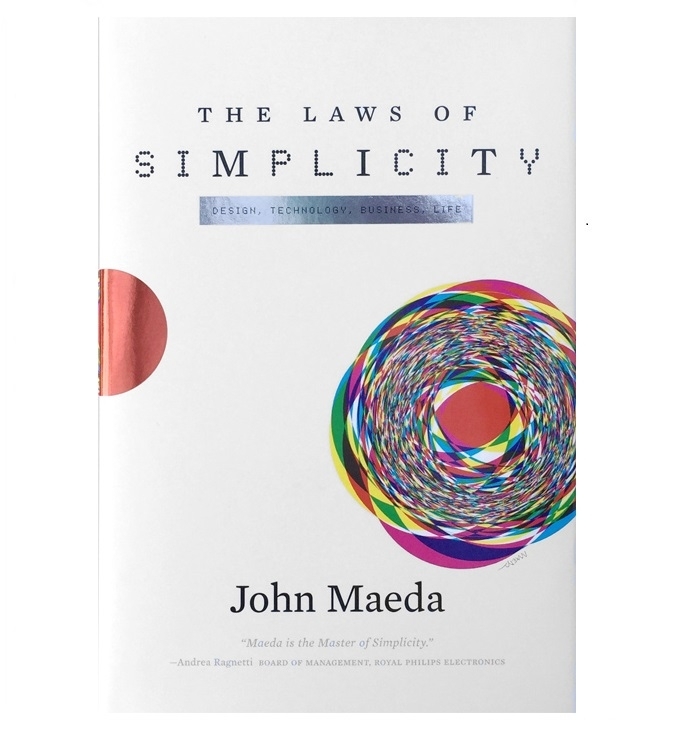 Ten laws of simplicity for business, technology, and design that teach us how to need less but get more.

Information from the publisher
Finally, we are learning that simplicity equals sanity. We're rebelling against technology that's too complicated, DVD players with too many menus, and software accompanied by 75-megabyte "read me" manuals. The iPod's clean gadgetry has made simplicity hip. But sometimes we find ourselves caught up in the simplicity paradox: we want something that's simple and easy to use, but also does all the complex things we might ever want it to do. In The Laws of Simplicity, John Maeda offers ten laws for balancing simplicity and complexity in business, technology, and design – guidelines for needing less and actually getting more.
Maeda – a professor in MIT's Media Lab and a world-renowned graphic designer – explores the question of how we can redefine the notion of "improved" so that it doesn't always mean something more, something added on.
Maeda's first law of simplicity is "Reduce." It's not necessarily beneficial to add technology features just because we can. And the features that we do have must be organized (Law 2) in a sensible hierarchy so users aren't distracted by features and functions they don't need. But simplicity is not less just for the sake of less. Skip ahead to Law 9: "Failure: Accept the fact that some things can never be made simple." Maeda's concise guide to simplicity in the digital age shows us how this idea can be a cornerstone of organizations and their products – how it can drive both business and technology. We can learn to simplify without sacrificing comfort and meaning, and we can achieve the balance described in Law 10. This law, which Maeda calls "The One," tells us: "Simplicity is about subtracting the obvious, and adding the meaningful."
Reviews
Abstract recommends this book particularly to marketing people, product designers and technical writers. — GetAbstract
FINALLY, a book about simplicity that is not too academic to read… At the book's heart is the Shinto belief in animism, the spirit in all objects. Nicholas Negroponte, one of Maeda's mentors, once told him to become a lightbulb, not a laser beam. This he has done; all this and more. — Susan Salter Reynolds, The LA Times
John Maeda's new book, The Laws of Simplicity, is simply terrific. It's exactly 100 pages, the illustrations are brilliant and the 10 Laws of Simplicity (plus Three Keys) are a canon to design one's entire life, much less specific products, services or business models. The subtitle is: Design, Technology, Business, Life. — Bruce Nussbaum, BusinessWeek's blog "NussbaumOnDesign"
Keep it simple, Stupid' is an old piece of advice, so much so that it's often abbreviated as the 'KISS principle.' But it's advice that's often ignored, and MIT Professor John Maeda aims to change that.... Designers and marketers will find Maeda's book both interesting and useful.... — New York Post
Maeda's Laws and Keys have an obvious practical application in everyday running of a busy life (and desktop); they also have the potential to translate into a productive methodology for any craft or design practice.... A very humble, enlightened and caring human, John's written a little bible. — Liz Farrelly, Crafts Magazine
Maeda's upbeat explanations usefully break down the power of less-fewer features, fewer buttons and fewer distractions-while providing practical strategies for harnessing that power.... Emphasizing the delicate balance-work involved in simplifying the complex, Maeda admits the process isn't easy, and that his ten laws don't necessarily provide all the answers-in numerous places, he directs readers to the web site where his theories continue to develop. Despite that, this slim book feels complete in itself; not only will it stimulate ideas, it will keep readers thumbing back for a second and third look at Maeda's deceptively simple advice. — Publishers Weekly
Technology and life seem to be getting more complicated, yet two great success stories, Google and the iPod, both provide the antidote of simplicity. In The Laws of Simplicity, John Maeda uses humble prose to provide an accessible guide, business and life, observing the principle: 'Simplicity equals sanity.' — David Smith, The Observer
Endorsements
If brevity is the soul of wit, simplicity is the soul of design. John Maeda uses the concept of simplicity to get at the nature of human thought and perception while drawing out tangible applications for business, technology, and life in general. The Laws of Simplicity is thoroughly optimistic, entertaining, and erudite, just as you would expect from Maeda. It is also the most compelling one hundred pages of design writing I have read this year. — Rob Forbes, Founder, Design Within Reach
Our lives and our businesses are faster and broader than ever. As such, they are also more complex and difficult to manage, for both customers and managers. Therefore, achieving simplicity in both our products and our organizations will be crucial for securing market share. No one has seen this more clearly than John Maeda, the Master of Simplicity. The Laws of Simplicity is a clear and incisive guide for making simplicity the paramount feature of our products; it's also a road map for constructing a more meaningful world. — Andrea Ragnetti, Board of Management, Royal Philips Electronics
I planned to skim/sample John Maeda's book, then decide to endorse it – or not. I quickly found myself mesmerized – and thence the only issue was deciding what were the strongest words I could muster in support of The Laws of Simplicity. The book is important; and Maeda has made an absurdly complex subject – simplicity – approachable and usable. Bravo! I hope the people who design the products I'll acquire in the next ten years take this book to heart. — Tom Peters
Publisher’s website